So this is the tale of my GPS and its inexplicable need to send me to Gary, Indiana. I’m not much of a snow driver yet, as I was raised a spoiled Californian. Around the time of my trip a week or so ago, there was a blizzard in the Midwest that lasted for two days. I drove up to Chicago after it subsided. I was a bit nervous about the whole thing, so I bought a GPS.

The morning of the trip, after tossing and turning after unexpectedly rousing at 2AM, I headed out at 5am instead of my planned departure of 7. And at first, it all went brilliantly.

The GPS was a marvel of technology. I obeyed its directions with awe and eagerness. How incredible! Why had I resisted such technology so long? Even when I took wrong turns, it recalculated (and I took a lot of wrong turns.) Amazing.

It was midway through Indiana that the first signs of technical difficulty appeared. In Indiana, suddenly the freeways became clogged, not just with cars, but with tanker trucks. These trucks whipped up enormous amounts of sediment from the roads, and slowed down traffic to a crawl. I turned on my windshield wipers, but alas! My windshield wiper fluid was doing that pesky thing where it defies the laws of physics and freezes solid on cold days. So I had this nasty sludge building up on my windshield, and it was steadily growing worse and worse.

And then my GPS detected traffic.

It was a very fancy model of GPS, you see. A model that compensated even for traffic jams. It recalculated the route, and steered me towards something called ‘Huntley’s Highway’ (or something similar). I never saw a sign for such a highway – perhaps due to the sludge on my windshield – but apparently I took a wrong turn instead of going onto it. But hey, I was on 80 N to Chicago, so all was well, right, even if traffic was a little slow?

But no, the GPS detected this traffic, and recalculated yet again. I followed it right off the highway into Gary, Indiana. And apparently, Gary has no snow-shoveling service.

I followed the GPS through these massive walls of snow, over this slippery road completely caked over with it. The area around me visibly degenerated into a shadier one the farther I drove into Gary, and then the GPS directed me to turn right. Each stoplight was an ordeal of fishtailing and swiveling tires.

And then the GPS directed me to drive seven miles through this.

Seven miles! I stared at the street ahead of me, completely choked with snow, delving into the unfamiliar depths of Gary, Indiana. Sure, the GPS was steering me clear of freeway traffic – paved, not-snowed-over freeway traffic – but it was steering me into a neighborhood so jam packed with snow I was sure to crash into someone, and I really didn’t want to do that in this neighborhood.

Not only that, but I couldn’t turn around. I kept intending to turn into a parking lot and go back in the other direction, but even the parking lots were barred by walls of snow that no one had cleared.

Finally, in desperation, I U-turned illegally in the middle of the block, despite the traffic ahead of and behind me. I backtracked to the freeway and then followed signs all the way up to Chicago. Occasionally, I flipped back on the GPS to hear more convoluted directions aimed towards sending me back into the snow-laden streets of Gary.

Once, when I turned it back on well after I’d passed Gary, India, it again detected traffic and said it was recalculating. I bellowed, “Nooooo!” out loud, which would’ve startled my plant if my plant was a dog or a person and capable of being startled– but alas, it’s a plant, so it wasn’t startled. I shut it off for good when it instructed me to head west– back towards Gary, Indiana!

Needless to say, the moral of this story? Traffic is not such a bad thing. It’s really not. And my GPS inexplicably wants me in Gary, Indiana.

I’ve since figured out the GPS traffic function, and disabled that sucker—so maybe another moral of the story is, test out a GPS before using it for the first time.

Some other things happened on my drive. I got stuck on top of a snowdrift, I didn’t have a shovel or gloves so I started worrying about frostbite, and then two friendly truckers helped dig me out. But that’s another story entirely.

The important thing is, this was my car post-trip: 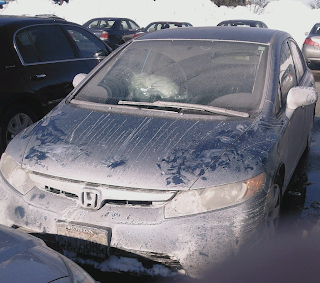 Needless to say, I went to a car wash, and now I am settled in a new location and ready to resume blogging/writing/doing things that don’t involve me getting lost and/or me exploring Gary, Indiana.